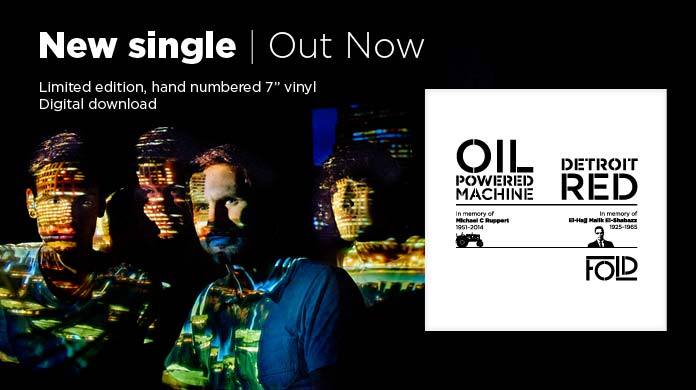 Following in Public Enemy’s footsteps Fold incorporate resounding speeches by the late Malcolm X & Michael Ruppert with force, funk & urgency on this double A-side. The single was released on December 1 as a hand numbered, limited edition 7” and digital download. Detroit Red was played by both Gideon Coe and Huey Morgan on BBC 6 Music.

Best known as Malcolm X, El-Hajj Malik El-Shabazz was a leader, activist, natural debater and gifted speaker with razor sharp wit and an extraordinary sense of empathy. He was nicknamed Detroit Red during his time as a hustler on the streets of Harlem. He was sent to prison where he spent 7 years rehabilitating and educating himself before becoming Minister Malcolm X.

Malcolm dedicated himself to the struggle for equality of black people in post slavery American society. He had a vision of a unified, global Pan-African movement. His murder yielded an incalculable loss both to the black community and to the progress of society as a whole.

History & media tend to spread the misconception that Malcolm was an advocate of violence. He was a peaceful man and never advocated violence as an end unto itself. He asserted every human being’s right to defend themselves when attacked. Malcolm understood that achieving equality requires challenging and transforming local, national and global power structures in which racism is deeply engrained.

February 21, 2015 marks 50 years since Malcolm X was murdered. Sadly recent events surrounding the murders of Tamir Rice, Michael Brown, Trayvon Martin and countless others clearly demonstrate that black people are still not equal in American society. Time has proven that the culture and institutionalisation of racism in post-slavery societies run too deep to alter with legislation alone, particularly when it is not enforced.

The American criminal justice system has repeatedly failed to serve or protect black people equally. The NAACP reports that

Owing in part to pervasive denial and neglect the situation is deteriorating and violence is escalating. Well conceived long term solutions need to be put forward, agreed and implemented swiftly in order to plant the seeds of real change. Lasting change also requires the ongoing drive of those courageous enough to break established cycles. Being brutally honest about the true state of affairs is a prerequisite for such individuals – a rare quality embodied by Malcolm.

We felt it both appropriate and necessary at this time to draw attention to the life and work of Malcolm X just as Public Enemy & Spike Lee did decades ago. It may help to remind people that there is still much work to be done. We also want people to be inspired as we have been by the fact that one person can make such an impact.

We wish to credit and thank Chuck D of Public Enemy for inspiring us to educate ourselves about the history of slavery. This is an area in great need of better representation particularly within the American education system.

Michael Ruppert – who took his own life on April 13, 2014 – was a controversial, complicated and sincerely caring individual. He began his career as a LAPD officer and having uncovered a major scandal became an investigative journalist and author. His work explored and exposed the geopolitical theatre that underpins the fabric of modern civilisation. His central argument – based largely on Hubbert’s peak theory – was that because our economic system is predicated on infinite growth in a world of finite resources, the collapse of industrial civilisation is inevitable unless we drastically alter our course.

Mike’s dedication and sincerity were admirable facets of his character. However, according to those closest to him he had an aversion to conflict that led him to divest from many of his long term achievements. His behaviour and work often reflected a degree of paranoia and for decades he struggled with alcohol addiction and suicidal thoughts. Though criticised by some for being a muckraker or conspiracy theorist it is widely accepted that the majority of Mike’s key geopolitical arguments and facts are valid. He was not perfect by any means but for a civilian to discover, understand and share what he did is remarkable.

Having already featured on our 2012 B-side That’s the Life Experience Mike had corresponded with us on numerous occasions. He readily gave his blessing to use the excerpt from his speech concerning the dependency of industrial agriculture upon fossil fuels that became the basis of Oil-Powered Machine. We are especially grateful for that blessing now that he’s gone.

“It is no measure of good health to be well-adjusted to a profoundly sick society.”
— Jiddu Krishnamurti