Bringing We’re the Ones to Amsterdam record stores… in person If you’re unfamiliar with how releasing physical records works the basic plan is as follows. First you make a record, then you get it manufactured, then the manufacturer delivers your records to a distributor who finally sends them to all the record shops in their distribution network. The trick there is that you need a physical distribution deal and these are not easy to get. In fact, we’ve never had one. Instead we’ve adopted a more personal – albeit somewhat guerilla and perhaps inefficient – approach by actually going to record stores, getting to know the people who run them and offering our records should they want to stock any. Having done this for a few years mainly in our own region of Yorkshire – developing quite a few lovely relationships along the way – we decided it was time to build some more bridges and do the same thing… in Amsterdam.

Admittedly the choice of Amsterdam was also guided by other reasons. Obviously because of how awesome and fun the city is but also because I spent 7 years in the Netherlands and the better part of 1997 living in Amsterdam. I am a naturalised Dutch citizen, Dutch is my second language and I still have many friends throughout the country. The easy going pace of life, the friendliness, the cozy bars and cafes, the scenic beauty, the (snack) food, tobacco, coffee and weed are all top notch. In short, I fucking love the place.

Furthermore, because Sam and I have been DJing a lot these past few years – with a monthly residency at The Doghouse Bar in Leeds plus festivals, events etc – we’d been pondering the notion of bringing our DJ offerings to other parts of the world. Since Sam’s also spent some fun times in Amsterdam – most of which he can actually remember – before either of us knew it we were looking for DJ venues in the Dam. Shortly thereafter a 5 day trip was booked.

In the meantime our second album We’re The Ones was being pressed on beautiful, clear orange vinyl by the excellent DMS Vinyl. By some miracle, the LPs were delivered a month before the release date (set for Record Store Day 2019) and as it happened 2 weeks before our trip. Suddenly the mission changed; we knew what we had to do: bring LPs to Amsterdam, go around as many record stores as possible and see if anybody wanted it. This would be our ultimate guerilla distribution mission.

On roughly 3 hours of sleep we arrived blearily at Centraal Station. After the usual ‘arriving in the Netherlands rituals’ and a pleasant breakfast diversion we went straight to the first record store that came up: Red Light Records. We were nervous, apprehensive, sleep deprived and horribly sober. The proprietor was completely stoned, an absolute legend and had fantastic records in his little shop. He liked our LP but didn’t think it was the sort of thing his customers were likely to buy. Instead of stocking it he made us a list of all the shops that he thought we should approach. All this while absolutely baked and minding the store. Amazing. I was aware that Red Light Records also has a radio station that often features live DJ sessions so we hooked up with those guys too thanks to the aforementioned proprietor and exchanged details for future collaborations. 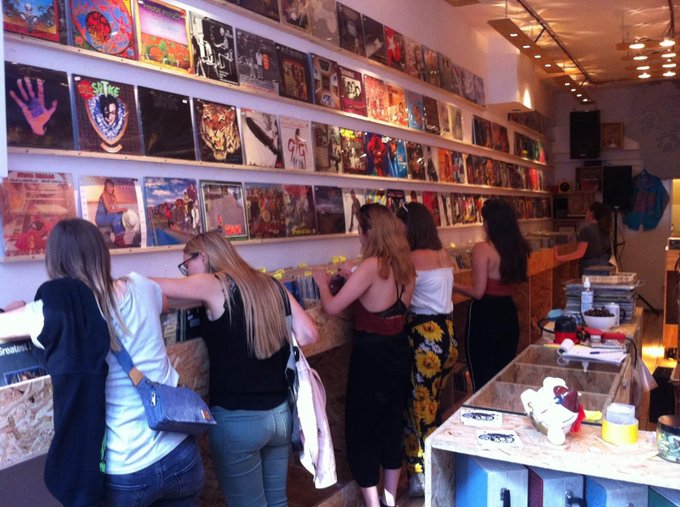 It so happened that there was another excellent shop right next door called Vintage Voudou Records and the proprietor was also a legend but trying to cut down on getting high with some experimental weed that had only trace amounts of THC. You’d never think so from the aroma. Vintage Voudou did take an LP off our hands quite readily. This is all too good to be true for the first 2 hours in Amsterdam, we thought to ourselves, and merrily trotted off to find a tram that would take us to our AirBnB.

A word about trams in the Netherlands: they are fucking amazing. They run frequently and on time; are seldom too full; generally pleasant; extremely comfortable; thoroughly modern and go almost everywhere in the city. One evening on our way into town a group of young German women convinced the assistant at the back of the tram to sing happy birthday to their friend over the tannoy. No matter what state we were in the tram was always safe as houses.

Having been a resident of Amsterdam for nearly a year I had developed a permanent distaste for the touristy bits and was weary of the whole idea of just going there for a weekend to get wrecked. There is, in truth, an awful lot more to Amsterdam than that. However, after settling into the AirBnb and despite the increasingly acute sleep deprivation Sam convinced me to venture towards the centre again for dubious reasons. I had all but given up the herb but Sam had other ideas.

Within half an hour we learned that they now sometimes separate coffee shops into ‘pure’ and ‘with tobacco’ zones; this was news to me. We had to hang in the latter (I mean, come on) which was of course an overheated basement full of the foulest tobacco-ridden air. Not long after there followed a lot of muffled giggling. We then had to find food and as I had the linguistic skills it was my job to do the talking. We got hoodwinked by a bakery that sold churros. I had no idea how to unpick what they were offering at the required speed, people were waiting impatiently behind me, so we walked out with something like 32 churros and a bucket of chocolate sauce.

These digressions may be tangential but are also relevant in that they illustrate the very tangible rewards of going somewhere to do something in person that nobody would usually think to do.

The next day we planned our first route around the record stores and off we went. Within 2 days we visited around 10 stores and left LPs in 4: Rush Hour, Black Gold, Platypus, and Waxwell. We’d highly recommend all of them. At this point we ran out of copies because we’d only brought what we could carry on the plane; our only regret was not bringing more.

Everyone at the stores was friendly and took the time to talk with us extensively. It was unusual to have artists from other countries walk in with their own vinyl. We even made a few friends. In case you haven’t realised it, record store proprietors are generally among the coolest people on the planet and people who hang around record stores are seriously into music. These are our people; we felt at home. 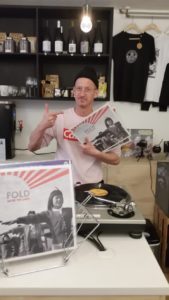 If this is all true of any record store in the world you now have to imagine how much more awesome this whole experience was because of actually doing it in Amsterdam. In between stores we’d stroll around, have a coffee, a snack, a beer, a smoke, sit in a park, admire all the gorgeous houses and repeat the phrase ‘man, I wish I lived there’ a lot. In our last ‘off duty’ few days we visited my old neighbourhood in Amsterdam Oost, not far from Muiderpoort station. The place has changed dramatically – it is so gentrified and clean now. I realised then to my horror that despite many trips to the Netherlands I had not been back to Amsterdam in 22 years. My mind was blown. Sam’s was too, pretty much all of the time.

What has also changed is that Amsterdam is even more international now than it was several decades ago. Businesses are much more dependent on the internet and many more international companies can now have their offices in the Dam. Our mission was not only to distribute records but to build bridges and in both areas it was a resounding success. Black Gold has ordered more records from us since, many people have popped up on social media with their discoveries of our LP and even a few glowing reviews emerged. We left feeling more connected than ever to another part of the world that isn’t really that far away but may as well be on another planet if you don’t take the time to visit.

We don’t imagine that many artists are in the same privileged position we were at that time but if you are a small act with a record this is a route we would definitely recommend taking. It was among the very best times we’ve had in many years. Thank you Amsterdam, we love you and we will be back. 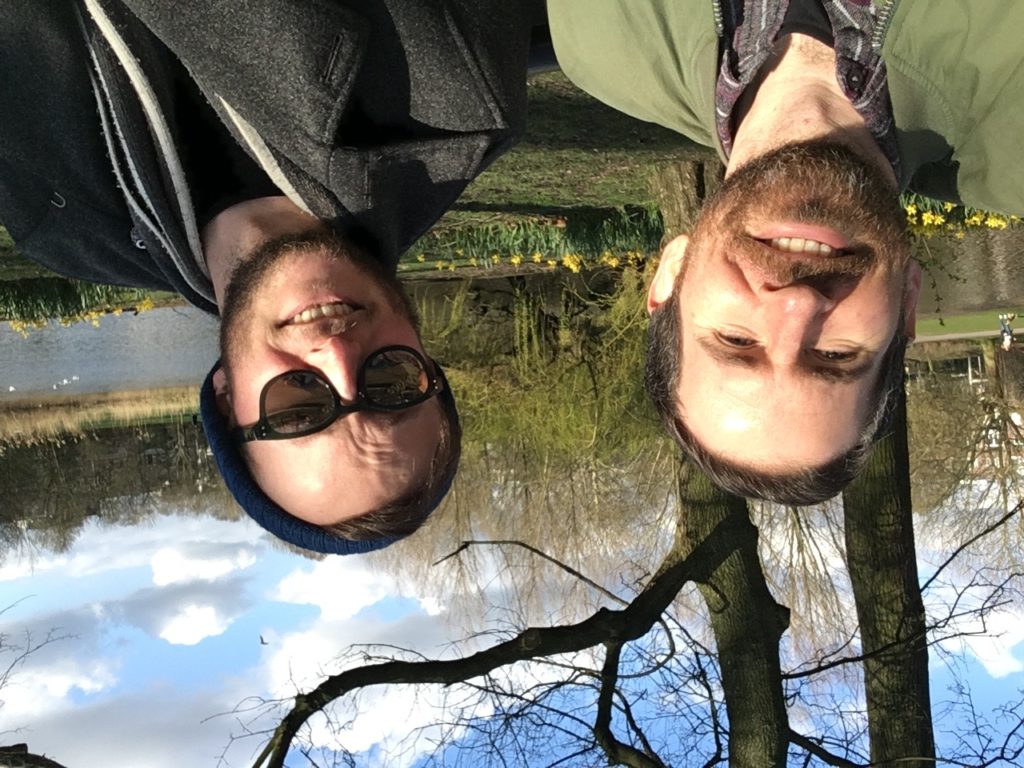 Sam & Seth (bros4eva) in Oosterpark. Man, we wish we lived there.