How will the Arts bring about cross-cultural solidarity? 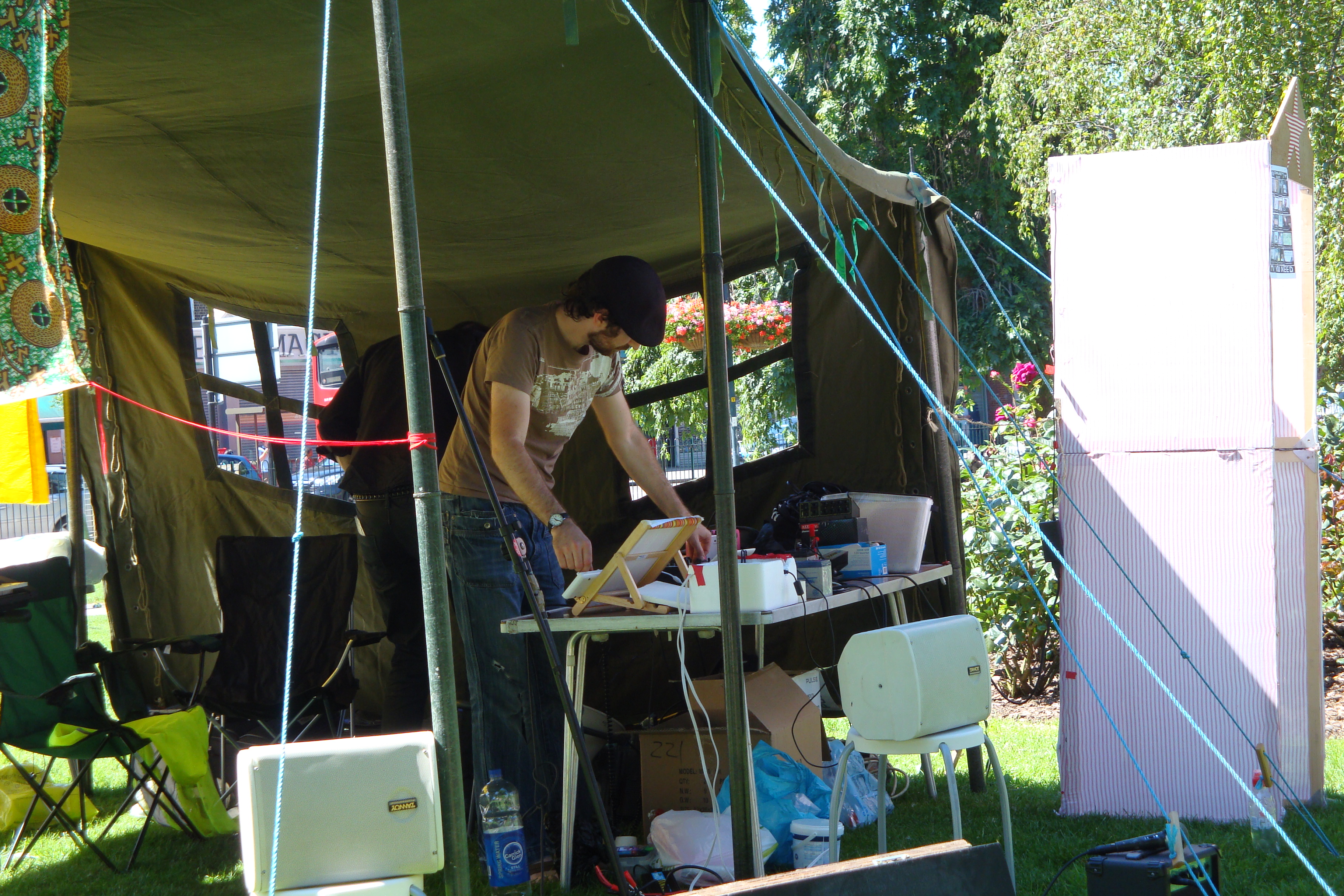 Fold at the 2011 Camberwell Arts Festival

Today’s gig on Camberwell Green was an enlightening experience for me. Apart from the blurb I’d read on the Camberwell Arts 2011 Festival website I really had no idea what to expect. Today was the final day of the festival and the idea behind the event – called Green Plot – was to encourage you, the people, ‘to plot your, and our, alternative structures for the future’ – to ‘join in and add your voice. Green Plot,’ the blurb continued, ‘[was] facilitated and entertained by artistic collectives, individuals and by other groups that are actively fighting cuts while exploring alternatives.’

To give you some background, Camberwell has long been home to an arts college – in fact, Syd Barrett studied there in the mid 1960s. Camberwell also sits within ‘one of the most poverty striken and deprived constituencies in the country’ – an ethnically diverse Labour stronghold with ‘the highest proportion of afro-carribean residents of any constituency in the country and the highest proportion of social housing of any seat, with almost 6 in 10 homes rented from the council or a housing association.’ The 2001 census results show that 54% of the population are white, 35% are black and full time students represent 9.3%.

In terms of those most adversely affected by cuts to social services the people of Camberwell must rank highly. There couldn’t be a more relevant audience for what we’re trying to get across.

Camberwell Green itself is a rare piece of common land situated in a hub of hectic inner city activity surrounded on all sides by intense car and pedestrian traffic. These conditions make it ideal for hosting an arts festival.

Upon arrival I was greeted by the sight of a handful of makeshift tents, placards, some politically motivated artwork and a very friendly group of people beavering away in the hot sun. The small, scattered crowd assembled across the green were mostly just random people soaking up the gorgeous weather.

The setup was beautifully makeshift. All of the electrical devices – including the amp (literally a bare circuit board) – were powered by 12 volt batteries hooked up to inverters via jump cables and had to be switched on and off all of the time to conserve power. I loved the whole ramshackleness of the setup and in the end it worked just fine.

When the first musical act – known as This Happy Band – got going the response was mixed. There was by then a small crowd of people gathered on one side to enjoy the show. This crowd was by and large either white, young and artsy or both. They were enjoying the show – it was definitely entertaining for that audience. The act combined theatrical props, audience interaction, folk instruments and tongue in cheek songs of protest into a jumpy, funny and engaging experience. In my opinion it was cutesy, perhaps a bit saccharine, but did make some good points. Then again I am a disgruntled, white, middle class, thirtysomething male with an arts background.

Soon a new stream of people began to appear on the fringe – a more ethnically diverse group who seemed to find the whole thing curious, lame, amusing, stupid or all of the above. A few men in particular came straight up to the performers and started playing with their props and getting right up in their faces. It became a little bit tense but there wasn’t any real conflict. It transpired that the men were mostly interested in performing a song of their own. Fair enough considering that was the point of the whole event. So they sang their tune – a Bob Marley cover – and everyone was happy again.

To me the situation was becoming frustrating. The reason we were there was to draw attention to the fact that we’re all being screwed out of a future and clearly this wasn’t being communicated effectively to the biggest potential audiences around. It really hit home at that moment how all of the other gigs I’d done previously were a case of preaching to the converted. This was different.

After the band finished I went straight in and played my set. During one of the tracks that features Dr Martin Luther King Jr an older afro-carribean man came up to me and asked about the music – he said he really likes hearing Martin Luther King’s voice set to ‘nice beats like that.’ Nobody complained, intervened or made a fuss during the whole set. The crowd didn’t increase or decrease either so it wasn’t as if people flocked to the music. But that one man’s complement not only made the whole day worthwhile it also reconfirmed to me in a small but significant way that the music I’m putting out there is able to reach across cultural boundaries.

After my set when the other acts resumed the same guys who had been a bit playful with This Happy Band earlier came back and started up again. Following that there was a very amusing and creatively executed puppet show about the true nature of the economy which managed to offend a thoroughly grumpy old Irish man who made the kids he was looking after leave the green because the message was ‘rubbish.’ He even threatened to shove one of the puppets down the performer’s throat.

Arguably the most important requirement of achieving real change across any society is unification. Today it has never been so clear to me that although valid, well meaning and sincere the Arts tend to speak in languages that are totally foreign to a lot of cultures. They seem to get through to a relatively narrow audience even when the subject matter, as in this case, concerns us all.

If we are trying to bring about collective solidarity via the arts it is no longer good enough to bury our heads in the sand on this matter. As artists we must let our work be actively informed by an understanding of other cultures and the different ways that similar issues are expressed. Today was an important lesson for me and an experiment towards this goal. Although many others are already engaged in the process there is so much more that can be done.